That's the question many are asking today after last night's episode of the Emmy Award-winning advertising-world drama on AMC.

In one scene, we hear Francis say over the phone, "Well, tell Jim His Honor's not going to Michigan." After a beat, he adds: "Because Romney's a clown and I don't want him standing next to him."

Obviously Francis wasn't talking about Mitt Romney, but rather George Romney, the moderate Republican governor of Michigan from 1963 to 1969.

The stock-in-trade of Mad Men has been crafting winking, knowing parallels between 1960s America and the contemporary United States.

Everything from office relationships to smoking during pregnancy is slyly contrasted with today's standards.

Weiner told Bill Maher on HBO's Real Time this past Friday that he's a Democrat.

One can only speculate about what message the writers may have been trying to send about George Romney's son Mitt.

Mitt Romney's son Tagg responded to the episode today in a pair of Tweets. In , he said, "Seriously, lib media mocking my dead grandpa?" And in , "George Romney was as good a man I've ever known. Inspirational leader, worked for civil rights, promoted freedom. We need more like him."

The elder Romney who, like his son Mitt also ran for president, died in 1995 at age 88. 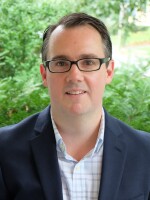 Neal Carruth
Neal Carruth is Senior Director, On-Demand News Programming at NPR. Carruth oversees teams working on many of NPR's most popular podcasts, including Embedded, Hidden Brain, Planet Money, and Rough Translation. In this role, he helps nurture programming innovation and the development of new content. He has been a leader in NPR's daily news podcasting strategy, helping launch Up First and The Indicator from Planet Money. He also strengthens connections between NPR's podcast portfolio, NPR's newsroom, and NPR Member stations.
Latest News
Support KUER
KUER is listener-supported public radio. Support this work by making a donation today.
Donate