One morning in 2011, Rémy Louvradoux went to his management job at the French telecommunications company where he had worked for 30 years. At 7 a.m., alone in the parking lot of his office near Bordeaux, in southwestern France, he killed himself.

His son, Raphael Louvradoux, told the news site L'Obs that his father wrote the company a letter two years before taking his life.

"He explicitly said that not only was it the fault of France Télécom's managerial policies, but that suicide was the only solution," he said. "No one responded. Nothing happened."

Rémy Louvradoux was not the first staff member to take his life at France Télécom, the company now called Orange. Between 2008 and 2009, there were 19 suicides of employees, who left notes blaming the company or who killed themselves at work. Twelve others attempted suicide during that period.

Now, over half a dozen executives or managers are on trial, including two defendants still employed at Orange, the prosecution team told NPR. Prosecutors say the management created a hostile work environment to get employees to quit, in a restructuring process that former employees allege became so severe that it led some staff to take their own life.

Defendants including former CEO Didier Lombard and his former deputy and human resources chief face charges of "moral harassment," while some of the other individuals are on trial on charges of complicity.

France Télécom had been part of the government's Ministry of Posts and Telecommunications. But under a privatization process, the state sold off most of its shares in the early 2000s.

Lombard wanted to cut 20% of staff — about 22,000 employees — to reduce debt and make the company more competitive. But many workers retained the protections they had enjoyed as civil servants.

It is extremely difficult to fire civil servants on permanent contracts in France, according to Philippe Askenazy, a labor economist at the French National Center for Scientific Research.

Employees in the private sector can receive significant severance pay, which provides a financial cushion while they look for a new job. Civil service contracts don't have that perk, so France Télécom employees were reluctant to quit.

"For [France Télécom], workers are just a wage in one sense and a cost rather than a real resource for their firm," Askenazy said. "They developed practices to push workers to resign."

Lombard, who served as the telecom company's chairman and chief executive from 2005 to 2010, reportedly told fellow executives that, one way or another, he would make workers leave — "either through the window or through the door." After the comment was reported by the newspaper Le Parisien in 2013, his lawyer seemed to acknowledge to reporters that Lombard had made the statement, saying his client had misspoken.

Lombard was quoted calling the suicides a "fad," which he later said was "an enormous gaffe."

Marie Pezé, a psychologist specialized in workplace distress, treated many France Télécom employees at the time. She said the company's privatization transition was particularly brutal, especially for the French.

"French people are very much attached, more than in other countries, to their identity at work," Pezé said. "They need to feel that when they go to their job, they are useful."

According to Pezé, Lombard created a special school of management at France Télécom to provide managers specific techniques "to push people out the door, to make their life every day unbearable at work."

A 51-year-old technician in Marseille accused his bosses of "management by terror" in a suicide note.

Engineers were demoted to call center jobs. Employees say they were micromanaged, isolated and assigned jobs without training. Families were moved across the country multiple times in short periods of time.

"You change an engineer into a salesman. You move him away from his family, because it's hard for his wife to find a job in a new region. France is a small country," Pezé said.

Pezé hopes the executives and Orange will be found guilty. She said it will "send a signal" to other companies to reconsider how they treat their employees, especially when privatizing public enterprise.

Orange, Lombard and the other defendants all deny the accusations. The defendants face up to a year in prison and fines of 15,000 euros (about $16,750). The verdict is expected in July.

Lombard's lawyer says it's unfair to hold his client responsible for harassing employees he didn't know, like technician Robert Perrin. His brother Jean, who also worked at France Télécom, told French cable channel BFM TV that constant demeaning remarks from bosses led his brother to take his own life.

Perrin wants Lombard to apologize and said he's asking on behalf of all the families who lost loved ones.

But that apology might never come. On May 6, the first day of the trial, Lombard read a letter expressing his "sincere and profound sadness that this situation involuntarily contributed to the fragility of some."

When Jean-Paul Teissonnière, a lawyer representing several of the former employees and relatives of workers who killed themselves, asked Lombard whether he had any regrets, the former CEO responded, "I will not respond to that question." 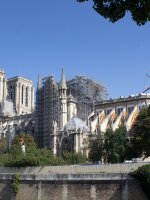