This morning, thousands of residents in Jackson, Miss., still do not have access to running water or have to boil what comes out of their tap. It's been nearly three weeks since a winter storm wreaked havoc on Jackson's infrastructure. Areas with mostly Black and low-income residents are still affected. Shalina Chatlani of the Gulf States Newsroom has more.

DEON SANDERS: When you push this up, water going to come out from right there.

CHATLANI: Sanders is a volunteer at this water drive-through. He says dozens of people have showed up this week, including some of his classmates.

SANDERS: They said their water would cut off. They couldn't flush the toilet or whatever. So they had to come out here and get some water.

CHATLANI: The city of Jackson says that, as of Sunday, there were fewer than 10 water main breaks in the system; less than a thousand residents had no water or little water pressure. The total population is about 160,000. The majority of the city still has boil-water notices. But Charles Williams, city engineer for Jackson, says those should be lifted and other problems solved by the end of this week. He says there are a few next steps.

CHARLES WILLIAMS: Make sure that all of our residents are restored with water, take samples, get our storage tanks filled.

CHATLANI: The areas of Jackson still impacted are predominantly Black and low-income. And some residents say even if their water is on, it comes out dirty. So to get by, people are going to drive-through giveaways and collecting rainwater, staying clean with alcohol wipes or going to a friend's to bathe. And three weeks into this crisis, residents are now dealing with issues that go far beyond the plumbing - for example, Forest Hill High School.

CHATLANI: Rocky Khanna is a teacher at Forest Hill. He says they were starting to bring students back to the classroom with COVID-19 safety precautions, but during the storm, the school had to close. It still doesn't have water.

KHANNA: And we have to have a certain level of water pressure or water to actually return.

CHATLANI: Khanna says the school has been busing meals to students and making sure they have water. But he's afraid these last few weeks could further slow down students.

KHANNA: Or they may not even have access to the Wi-Fi and Internet.

CHATLANI: Jackson Mayor Chokwe Lumumba says it's important that the city invests in low-income communities, even after the water is turned back on.

CHOKWE LUMUMBA: What is the poverty rate? What is the quality of education? What is the stability of our infrastructure? Development goals that really should be the metric of success of any economy.

CHATLANI: Lumumba says residents need access to basic resources so they are prepared to weather any storm. 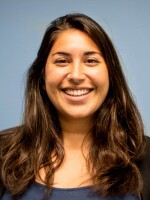 Shalina Chatlani
Shalina Chatlani is the 2018-19 Emerging Voices Fellow. Previously she was the associate editor for Education Dive, a contributing reporter for The Rio Times in Rio de Janeiro, Brazil, and an intern for Mississippi Public Broadcasting. Shalina graduated from Georgetown University's School of Foreign Service with an undergraduate degree in Science, Technology and International Affairs and later graduated from Georgetown's Graduate School of Arts and Sciences with a master's degree in Communication, Culture and Technology. Shalina is a fan of live music, outer space discussions and southern literature.
Latest News
Support KUER
KUER is listener-supported public radio. Support this work by making a donation today.
Donate