Many communities across the Mountain West were once known as “sundown towns.” Those are places that once had policies to force people of color to leave town by nightfall. If they didn’t, they could be arrested or worse. One town in Nevada is grappling with its racist legacy.

Listen to this story.

In Minden, Nevada, people mill about a downtown farmer’s market on a warm spring evening. The town of about 3,000 is nestled against the Eastern Sierra Nevada, and the sun is starting to dip behind the mountains.

And at 6 p.m. every day, right on cue, a deafening siren blares across the Carson Valley. For some people here, the sound is a reminder of the area’s racist past.

“It always, kind of, for me, a moment of silence [for] what used to happen back in the day,” said Tracy Kizer, a salon owner, mother of four, and a lifelong resident of the Carson Valley.

She’s also a citizen of the Washoe Tribe, the Native people who were first here. In 1908, Douglas County enacted an ordinance that required all Indians to leave town by 6:30 p.m. Some say that’s why the siren blared at 6 p.m. — to tell Native people like her to get out. Kizer says it’s a daily reminder of the injustice her family has had to endure.

“You don’t know how much this really affects our community,” said Kizer. “It isn’t just what our ancestors went through; it’s the pain and the hate that was formed to bringing that into law.”

Historians estimate there were once as many as 10,000 sundown towns across the country. Most towns and counties in the Mountain West implemented their sundown ordinances around the turn of the 20th century, but here’s the thing: Town officials say the siren had no connection with the racist ordinance of the past.

“It was never the intent of the siren, and it was never tied to any ordinance that required sundowner town [sic],” said J.D. Frisby, Minden’s town manager. According to him, the siren was always connected to the town’s volunteer fire department.

“They set it to go off at noon and 6 every day for insurance reasons and maintenance purposes,” he said, “and it just so happened to be within a close proximity of the sundowner ordinance of 6:30 that I guess people psychologically tied the two together.”

Some people in town buy that; others don’t. But either way, the siren is now associated with the sundown ordinance.

State lawmakers recently stepped in. They passed a measure banning the siren from sounding at 6 p.m. The law doesn’t say a word about blaring the siren at any other time, meaning Minden can continue to sound the siren at noon, but that idea has the community split.


Back at the farmer’s market, the siren blares through the valley.

“It doesn’t evoke anything positive or unifying for the community,” said Liz Hastings. “I feel like it’s embarrassing.”

Others, though, want Minden to defy lawmakers, like 27-year-old Logan Peterson who has lived here all his life.

“I’m sorry the noise offends them, but that’s not by any means what it means today,” he said. “It’s a tradition.”

For Kizer, and other tribal members, if the siren went off at a different time, that would be fine.

She says blaring the siren at 6 p.m. is just too close to the historical 6:30 p.m. curfew that forced Native people like her out for the night. 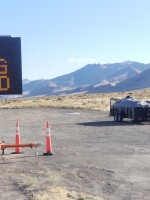