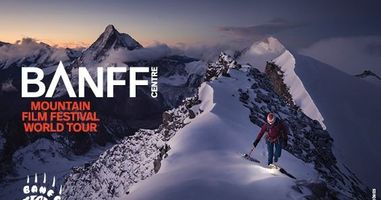 Banff Centre Mountain Film Festival World Tour is coming to Ogden on Friday, Saturday and Sunday, February 14-16, 2020! Banff Centre Mountain Film and Book Festival is one of the largest and most prestigious mountain festivals in the world! Hot on the heels of the Festival held every fall in Banff, Canada, the Banff Centre Mountain Film Festival World Tour hits the road. With stops planned in about 550 communities and more than 40 countries across the globe, this year’s tour features a collection of the most inspiring action, environmental, and adventure films from the festival. Traveling to stunning landscapes and remote cultures, and bringing audiences up-close and personal with adrenaline-packed action sports, the 2019/2020 World Tour is an exhilarating and provocative exploration of the mountain world. From the over 400 films entered into the annual Festival, award-winning films and audience favorites are among the films chosen to travel the globe. Join the Snowbasin Winter Sports Foundation when Banff Centre Mountain Film Festival World Tour brings the spirit of outdoor adventure to Perry’s Egyptian Theater, 2415 Washington Blvd, Ogden. Each evening begins at 7:00 p.m. and will feature a unique selection of films such as Into the Canyon (a Pete McBride film about the extreme physical hardship where the bonds of friendship are stretched), Charge (freeskiers charging as hard as they can for a week in Chatter Creek, BC), and The Motivator (filmmaker Aaron Hitchins turns his camera on the person who has motivated him to lead a life connected to the outdoors: his mother). Funds raised from the festival will benefit the athletes and activities of the foundation. For tickets and information contact Perry’s Egyptian Theater, 801-689-8700. Box office hours are from 2-6 p.m. or order tickets online at egyptiantheaterogden.com.