The Koch Foundation has given millions of dollars to universities in the United States, including a $25 million pledge last spring to Utah State University.

Investigations show some influence on curricula and hiring because of those donations. Alison Berg and Carter Moore, two reporters at USU’s student newspaper — The Utah Statesman — dug in at the Logan campus. Their uncovering was detailed in a partnership with The Guardian newspaper, published earlier this month.

Diane Maggipinto: How did you and your colleagues start looking into the Koch Foundation after it promised to donate millions to USU?

Alison Berg: Through a public records request, we got the contract between our university and the Kochs — the gift agreement — and that agreement was pretty carefully worded. Like you could tell that they knew that people were going to be looking into this. So then we looked at the 2008 agreement. That clearly spelled out a lot of agreements that the university had to follow. They had to hire certain professors. They had to tenure those professors so that those professors could be on as long as they wanted to be.

DM: So these conditions as it were are unusual in terms of large amounts of money bestowed upon a university?

AB: It's very common for universities to get large donations — that's how most public universities are funded. For example: We've also received millions from the Huntsman Foundation. And as far as we could find they never asked us to do anything with that money besides spend it in certain places. But it was never, "The curriculum needs to be changed here. You need to do this here or that here."

DM: So what was the one thing that then led to many other discoveries?

AB: I would say it was really the 2008 gift agreement — looking at those professors and their curriculum. A lot of it as well came from tips, and we were able to talk to a lot of students who were more on the ground and saw things that we didn't necessarily see.

DM: What were they telling you?

AB: A lot of people talked about the [Utah State University think tank] Center for Growth and Opportunity and Strata Policy [whose outreach director, USU professor Randy Simmons, has strong Koch ties] about how those two centers have essentially combined. We were able to look at some of the curriculum that had changed. We were able to talk to students that had felt like programs that they had participated in were very one-sided.

DM: One-sided in what way?

AB: A very, like, Libertarian leaning. Well, so very free market, no government regulation, capitalism is great. Anything else is terrible.

DM: Speak a little bit more if you can on the Strata Policy.

AB: A libertarian think tank off campus that focused mostly on environmental research, but it was interesting because it was staffed almost entirely by business faculty and students. Their director, Randy Simmons, is a longtime professor at Utah State. He teaches one of the intro to economics classes that most business students and nonbusiness students have to take. And so thousands and thousands of students go through his classes and hear the same ideas that are being researched at Strata Policy. The tricky part with the center [is] it’s housed on campus but the administration will just say, "It's not part of the campus. We don't have any control over it." But it's staffed entirely by Utah State professors and Utah State students and it was funded in part by a gift that was donated to Utah State.

DM: Any concerns — for or against this reporting — among faculty and staff at Utah State?

AB: Well, so that is the weird part. We were expecting tons of calls and emails from the administration, but we got nothing. No criticism. I'm sure that there have been conversations behind closed doors, but we haven't heard anything.

DM: Have you found anything similar happening in other colleges and universities around the country?

AB: This is the pattern with the Kochs. So George Mason University is the most notable. They have received tons of money from the Koch brothers — high up in the millions. That's a lot of how we were able to find the trends at our university was just looking at what had happened there. So they had a very similar situation with think tanks, with professors. We did look to see if we could find the same thing with liberal donors — so George Soros and Michael Bloomberg donate a lot of money to universities. But as far as we could find, there wasn't the same idea of "Curriculum needs to change."

DM: So what happens now?

AB: We do have plans to put more in our college newspaper — the Utah Statesman — and I think we want to kind of start focusing more on all of the different pathways of influence that we've seen between USU and the Kochs.

DM: Did you talk to any students who suddenly have new ideas that could be tied directly to the influence or the professors who were tapped to teach there?

AB: We did talk to a lot of students who came in as freshmen and maybe came from just like your traditional Republican household and shifted their views to more libertarian. Still the same ideas about capitalism and anti-environment, anti-regulation but now they're pro-choice. And they're pro-immigration. And pro- legalized marijuana. And so that was really interesting for us to find especially in a state like Utah that's for the most part pretty traditionally Republican. 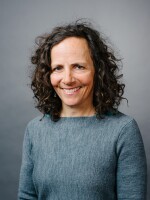 Diane Maggipinto
Diane Maggipinto is a longtime radio pro. She's worked in various states of sleep deprivation and around the country, in commercial and public radio newsrooms, and was a fill-in at KUER before stepping into the permanent Morning Edition host position in January 2015. Early into her new gig, she was nominated for an award for sports reporting and, when not at work, enjoys participating, not spectating. Skiing, mountain biking, hiking, trail running and wrangling her two children and pair of black and white pets are activities she squeezes in when not on the air or recording voiceovers as a freelance voice actor. She is also an emcee for non-profit organizations around the valley.
See stories by Diane Maggipinto
Rocio Hernandez
Rocio is coming to KUER after spending most of her life under the blistering Las Vegas sun and later Phoenix. She earned bachelor’s degrees in journalism and Spanish at the University of Nevada, Reno. She did brief stints at The Associated Press, the Las Vegas Review-Journal and Reno Public Radio. She enjoys wandering through life with her husband and their toy poodle.
See stories by Rocio Hernandez
Latest News
Related Content
Support KUER
KUER is listener-supported public radio. Support this work by making a donation today.
Donate