Health, Science & Environment
Extra Utah
This summer, KUER producer Benjamin Bombard is traveling around Utah looking for places that are … extra. Extreme. He recently took his family on the road and went looking for the oldest thing in the state, and they found it. It’s a rock formation in northwestern Utah.

Extra Utah: A Journey To The Oldest Spot In The State

This summer, KUER producer Benjamin Bombard is traveling around Utah looking for places that are…extra. Extreme. He recently took his family on the road and went looking for the oldest thing in the state, and they found it. It’s a rock formation in northwestern Utah.

I first heard about the oldest rock in Utah a few years ago. A family friend, Miren Jayo, told me about it. She majored in geology at the University of Utah and graduated at the top of her class. To her, geology is the ultimate ego check.

“I’m really intrigued by the idea of deep time,” Jayo recently told me. “And I also think it’s interesting that the majority of the earth’s history did not revolve around us; that what sometimes people call the Anthropocene or the age of the human species is going to be, in the grand scheme of things, just a blip in history. It makes me feel small.”

Humans have been around for about 300,000 years. The earth, on the other hand, first came into formation about 4.54 billion years ago. The story of the oldest rock in Utah begins long after that, somewhere in between the birth of the earth and when humans showed up. Back then, the planet was dominated by single-celled organisms that ate nickel and belched methane. Oxygen was hardly even a thing then. And the land that’s now Utah had just come into existence.

According to David Dinter, a professor of geology at the University of Utah, what we now think of as northern Utah was first formed when a continental fragment, known as the Grouse Creek Block, moved northeastward and crashed into another ancient part of the earth’s crust, the Wyoming Province.

“That happened sometime before 2.54 billion years ago, and that’s the first time we have anything corresponding [to] a northern Utah,” said Dinter.

Sometime after that, a blend of rocks was transformed underground by extreme heat and pressure — it was metamorphosed — and it turned into a new kind of rock, the oldest rock in Utah.

The rock formation is known as the stretched pebble conglomerate. It’s around a thousand feet thick, most of which is underground, but as Dinter told me, it outcrops in spots on the northeastern slopes of the Raft River Mountains in Box Elder County.

A few weeks ago, Jayo joined me and my family for a trip to the northwestern corner of Utah to find that oldest rock.

Our first destination, though, was the treeless southern slopes of the range. There, we came across a later chapter in the geologic history of the area, when what’s now Utah was part of a supercontinent called Rodinia, which preceded Pangea.

Around 800 million years ago, Dinter explained, the continent began to tear apart.

“Right along what’s now the Wasatch front, Antarctica and Australia, believe it or not, began to pull apart from what’s now Utah, and form a vast ocean,” said Dinter.

On the south side of the Raft Rivers, we found Elba quartzite, rock that dates back to before Australia and Antarctica bid bon voyage to Utah. We saw it everywhere, scattered on the ground and jutting out from the earth in beautiful, scaly chunks of pale blue and pure white.

Jayo, who studied under Dinter at the University of Utah, has learned how to read the land and the rocks like a book. Looking at the Elba quartzite, which is a billion years old, she began to think more about the different chapters that the planet has passed through over the eons.

Later that afternoon, we all loaded back into the car — Jayo, my wife Katherine and I, and our son Sebastian, who’s a toddler. We made the drive around the mountains to the lushly forested northeastern slope.

It was a short but steep hike to a cliff band on the mountainside. And there it was: The oldest rock in Utah — the stretched pebble conglomerate.

It was a smooth rock wall with a glossy finish. The wall was as tall as a house, and you could clearly see individual rocks, shaped like flying saucers, that were cut in cross-sections and stacked on top of each other, almost like bricks.

“This was, at one point, river stones cemented in some matrix,” Jayo told us. “And they’ve literally been elongated through pressure. And none of them were this color.”

My wife noted the astounding range of hues in the rock: aquamarine, grey-purple going to white, and a shade of orange she called “creamsicle.”

For my part, I tried to imagine what the earth could have been like back when the stretched pebble conglomerate was formed, more than two-and-a-half billion years ago. There would have been no plants or trees, and no animals; just rock, sky, sand and water. It would have been muggy and kinda stinky. To me, it felt alien, or maybe I felt like an alien visiting a strange new planet.

After coming back to the present, I turned to something familiar: my son. Seen against the backdrop of deep time, he’s brand new, only 20 months old, but he’s already metamorphosed into something completely different. As he and I brushed our hands against the oldest thing in Utah, I wondered what the earth will look like in the blip of his lifetime. 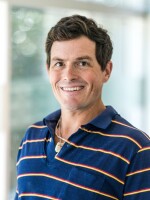