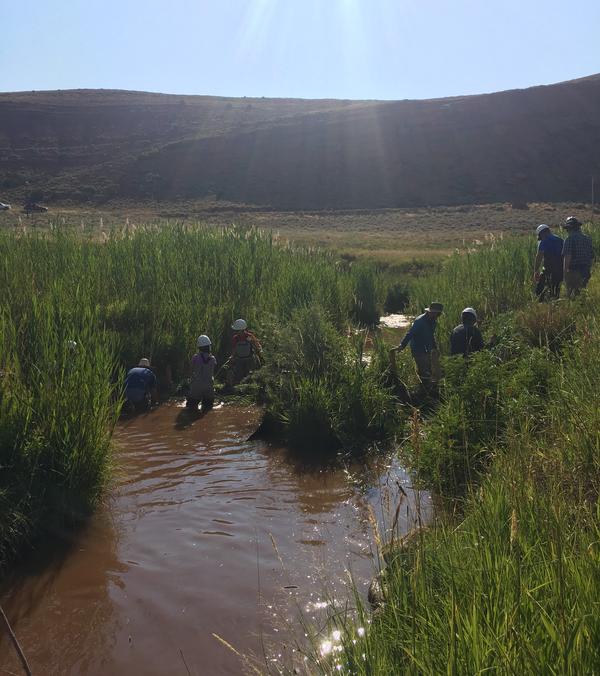 It's no secret that water is a problem in the West. Historically, the humble beaver helped maintain wetlands and ponds across the arid landscape but their populations were decimated during the fur trade and their numbers dropped dramatically from 400 million to just 100,000 by the turn of the twentieth century. But Canada's national animal is making a comeback and scientists think they have an important role to play as our region fights drought.

Too many ranchers and landowners out here, the beaver is a destructive little beast. Not only can it wreak havoc on irrigation systems, it can take down trees, nibble through fiber-optic internet cables, and cause the occasional flood. But if you ask Jeremy Maestas, he said there's much more to the animal.

"Just through their diligence and 24-hour work ethic, they're making amazing things happen in the streams," said Maestas. "And because they've been here for millennia, the plants that live here have evolved with their browsing and beavery."

Maestas is a wildlife biologist and he said the beaver is essentially a walking, talking ecosystem. Instead of just using dams to control water, Maestas said we could also follow the beavers lead. He called it a "sticks and stones" approach.

"Rather than diesel fuel and Tonka toys, we just direct the water to move sediment and grow vegetation, and do all the good things we want the ecosystem to do," said Maestas.

One of those good things includes storing more water in the ground. Across the Mountain West, most precipitation comes in the wintertime. But when snow melts, it can often be in a hurry. Turning into runoff or rushing down a stream to a bigger river, and far away from where it's needed.

But if it encounters something like a beaver dam, Maestas said the water gets delayed.

"The longer that we can keep that on the landscape, we increase the productivity of those plants. And ultimately leads to more drought resilience, right? These sponges fill up with water. It's like putting money in the piggy bank for those lean times," Maestas said.

Lean times like when you don't get a lot of snow. Or, when rising temperatures mean snowmelt happens early and the rush of water comes too soon for peak water demand in the growing season.

"But it really isn't until you get down in the mud and you start building these that you understand the process that you're trying to fix," Maestas added. 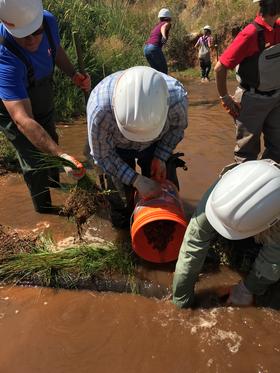 So one afternoon in early August, about 40 people got their toes wet—and muddy—building a few of these beaver-like dams on a Nature Conservancy testing ground in Wyoming. The group mostly included people from agencies like the Bureau of Land Management and Game and Fish.

"I feel like this is the perfect day to try something new," said Corissa Busse, who works for The Nature Conservancy in South Dakota.

She and the others spent about a day and a half in the classroom, learning what makes a beaver tick. They won't have the power of chisel-like teeth, so workshop instructor Joe Wheaton told them to be creative.

They brought some untreated fence posts from town to build the dams, but otherwise, they had to use supplies from the area just like a beaver would. That meant willow branches, sticks, stones and mud. The materials allow the structure to be porous. Water can trickle through, but flows will still slow down long enough to soak deep into the ground.

Jeremy Maestas said there's another big difference between this and a dam.

"We don't want to be constantly coming back in here with human labor and effort trying to keep it alive," said Maestas. "So, the sooner we can turn it over to Mother Nature, to do her job, the better off we're all going to be."

By Mother Nature, Maestas meant beavers. Once these human-made dams are established, they will re-introduce the animal into the area.

Maestas said this won't work everywhere, especially in more urban settings, or places where the animal could interfere with infrastructure. But in the right setting, Maestas said, "We're bringing nuisance animals into areas where they're wanted."

That way, he said, maybe beavers can begin to solve the problem of water in the West.

A local effort to bring beavers back to Salt Lake City's Red Butte Canyon is dead in the water after the U.S. Forest Service sunk the idea this week.

Two small beaver dams lie at the heart of a quarrel in Draper. County flood officials are ordering residents to take them down. But the homeowners say the dams protect the wildlife and value of their homes.