Faces Behind The Fires: The Meteorologist | KUER 90.1

Faces Behind The Fires: The Meteorologist

Wildfire season is ramping up across our region. There are all sorts of people involved in waiting, watching and fighting them -- people you might not expect. We’re profiling some of them in a series, Faces Behind The Fires.

Makoto Moore is like the paramedic of weather. When firefighters head out to quash a wildfire, he goes with them. His purpose is to make sure unexpected changes in the weather don’t make the blaze worse and put the firefighters at risk.

“It's challenging. It's stressful. It's far different than being a weather office, that's for sure,” says Moore, who is something called an incident meteorologist.

In his National Weather Service office in Pueblo, Colorado, it’s pretty tame. He’s watching the radar to see how storms are shaping up across a big chunk of the state.

“Let me take a look at radar over here,” he says, rolling a chair up to five computer screens showing weather patterns over multiple states. “There’s definitely some showers out there.”

He’s thinking big-scale, looking at thousands of square miles that contain millions of people. On the road it’s a different story. 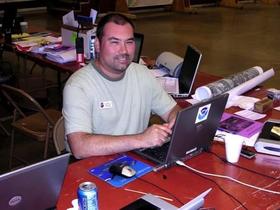 “When I go on a fire, I have to shift gears. Now, I'm worried about that little patch of ground and that specific group of people,” he says, referring to the firefighters he’s working next to.

On a fire, he becomes a one-man weather service.  He’ll still be watching satellite data on his computer, but he’ll also be gathering a lot of information from the ground.

There’s a lot of reasons he goes there in person rather than watching weather from the office. One of those reasons happened more than 20 years ago and continues to haunt people like Moore to this day.

In July 1994, lightning struck the top of a mountain in Colorado. It started a small fire that smoldered for a few days before people realized they might need to act.

“And they eventually sent some people in -- smokejumpers -- to work on it,” he says.

The smokejumpers dropped in and started working the fire, but as they did a cold front started coming in, which might sound like a good thing -- cold air on a hot fire -- but it isn’t. Not at all.

It can rile up winds and make them turn sharply.

“So for instance, you're working one side of the fire, getting a handle on it. All of a sudden the front comes through and now the fire's coming right at you,” says Moore.

“The red flag warning never made it to the people on the ground,” says Moore.

So, the smokejumpers kept working, the cold front hit, he says, “And all of a sudden, the fire grew immensely and it turned on them and started chasing them.”

They ran to escape the wall of fire, and some did. But fourteen people died -- largely because they missed a weather alert.

“Right. And that's why I get called out on fires,” says Moore.

He’s right there to give people a heads up before things become dangerous. There are now about 70 people with the National Weather Service across the country trained to do what he does. 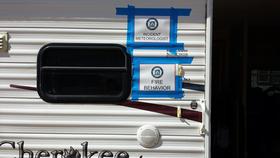 For the most part, they’re right there with the firefighters they’re protecting -- camping with them, eating breakfast with them, delivering forecasts in person and radioing them throughout the day.

Moore even labels his tent “IMET” for incident meteorologist.

“So, if for some reason they need to get me up in the middle of night they know which tent to rattle,” says Moore, who estimates he’s worked on more than 30 fires at this point.

He already has a bag packed and ready at home and a big plastic crate of equipment here at the office. Inside, there’s a weather balloon that he can fill with helium and send up into the air with a package of instruments dangling from the bottom. There’s also something that looks like a handheld fan for getting temperature, wind speed and direction.

For now, the box will stay latched and Moore will go back to his computer screens. But that could change in an instant, with something as small as a shift in winds and a spark from an ATV.

Faces Behind The Fires: What It Takes To Lead Wildland Firefighters

Rowdy Muir started fighting fires on the front lines when he was 27.

Faces Behind The Fires: Fish Biologist

Fire experts say this season could be big for wildfires in our region. Our Mountain West New Bureau takes you behind the scenes with stories about the people who protect our communities, land and wildlife during wildlfire season.

This story is about the people who rush into the smoke not to save people or structures, but … animals.

Faces Behind The Fires: Hotshots

Wildfire season is ramping up across our region. There are all sorts of people involved in waiting, watching and fighting them -- people you might not expect. We’re profiling some of them in a series, Faces Behind The Fires.

Lyle St. Goddard, 56, is running along a dirt trail on the Blackfeet Reservation in Montana.

“It takes me about a lap to loosen up,” he said.

Being a hotshot is a young man’s game.

“I still can do it,” St. Goddard, one of the oldest crew members in the country, said. “I just got to keep in shape. I’ll be okay.”