These days we're hearing from reporters about spring break destinations. And this morning, we head to a place called Tuckerman's Ravine in New Hampshire. It's one of the most storied backcountry ski slopes in the country. Every spring, thousands of skiers brave avalanches and ice-falls to test themselves on the slope.

New Hampshire Public Radio's Sam Evans-Brown made the trek this past weekend.

(SOUNDBITE OF STRONG WINDS AND FOOTSTEPS)

SAM EVANS-BROWN, BYLINE: It's a given: on spring weekends, if there's good weather forecast, by 7 A.M., the Tuckerman's Ravine parking lot will be overflowing with hundreds of cars. Matt Riley drove 10 hours from Annapolis, Maryland and is haltingly lugging his snowboard up the three-mile trail through the woods, to the top of the Tuckerman headwall.

MATT RILEY: I don't understand why people do this for fun. But I think it was worth it, to get to the top and snowboard down.

EVANS-BROWN: Since the 1930s, crowds of thousands of skiers have been making the pilgrimage to Tuckerman's. They come for the copious amounts of snow that blows off the summit of the highest peak in the Northeast, Mount Washington, and settles about 75 feet deep in ravine's bowl-shaped glacial cirque.

(SOUNDBITE OF A CROWD)

EVANS-BROWN: Tuck's has its own legends. Jeff Leich, executive director of the New England Ski Museum, says the central one is the story of Austrian Toni Matt, schussing the headwall. In a 1939 race from the top of Washington, on wooden skis and in leather boots, Matt miscalculated the pitch of the slope and bombed straight down the steepest part.

JEFF LEICH: People that were there still recall the sound that the flapping of his baggy ski pants made, as he ripped by the spectators.

EVANS-BROWN: Between runs, skiers gather at the bottom of the bowl to watch the others making their turns and crashes.

EVANS-BROWN: Every year a few dozen people are injured at Tuck's. Regardless, the biggest cheers are reserved for those who crash hard but get up unhurt.

EVANS-BROWN: Occasionally there are fatalities. Skiers fall into deep crevasses, are caught in avalanches or are hit by falling ice.

Pierre Camirand, from Boston, is among those braving the danger to sun on at a granite outcrop called the Lunch Rocks. These rocks are notorious for the impressive ice flows that loom above them and sometimes slide loose.

PIERRE CAMIRAND: There is a sign at the bottom that says something like, ice the Size of Large Automobiles travel at high rates of speed, and hits rocks and sends deadly shrapnel in all directions: Be Ice Smart.

EVANS-BROWN: The upper slopes of the climb are so steep that you can easily put your hands onto the snow in front of you while standing up straight; some climb on all fours.

EVANS-BROWN: Eric Meyer's dog chases a passing skier down Right Gully. Meyer drove up from the Bronx to get his turns.

ERIC MEYER: First time I've ever been interviewed on a 45 degree slope.

EVANS-BROWN: He sums up the allure of Tuck's: It's a pocket of the terrain found in the Rockies, a rarity here in the East. And with no lifts or lodge, skiing here is pretty close to what it was like nearly a century ago.

MEYER: Having grown up in Colorado, it's exciting to have some real steep terrain. So you get out here and its quiet, and you and your legs working hard getting up the hill.

EVANS-BROWN: Skiing at Tuckerman's peaks in April and early May, when avalanche danger drops but there's still plenty of snow. This year, the old-timers say the snow is better than it's been in decades.

MCEVERS: Thanks for making NPR part of your day. Don't forget to listen to ALL THINGS CONSIDERED later, right here on your Public Radio station. 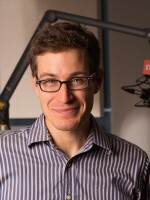 Sam Evans-Brown
Sam Evans-Brown has been working for New Hampshire Public Radio since 2010, when he began as a freelancer. His work has won several local broadcast journalism awards, and he was a 2013 Steinbrenner Institute Environmental Media Fellow at Carnegie Mellon University. He studied Politics and Spanish at Bates College, and before reporting was variously employed as a Spanish teacher, farmer, bicycle mechanic, ski coach, research assistant, a wilderness trip leader and a technical supporter.
See stories by Sam Evans-Brown
Latest News
Support KUER
KUER is listener-supported public radio. Support this work by making a donation today.
Donate