The 9th U.S. Circuit Court of Appeals is expected to rule soon on the case of Adree Edmo, a transgender women who is seeking sex reassignment surgery while serving a prison sentence in Idaho.

Edmo, who was sentenced to prison in 2012 following her conviction of sexual abuse of a minor, sued the state for the surgery and won. The state then appealed.

The appellate court’s impending decision on her case could have implications not only for her but for transgender inmates across the West and possibly the country. She is scheduled to be released in 2021.

KUER's Roddy Nikpour spoke with Amanda Peacher of our Mountain West News Bureau who has been following this story and has just released a podcast about the case called “Locked.”

This interview has been edited for clarity and length.

Roddy Nikpour: Who is Adree Edmo and why should we care about her case?

Amanda Peacher: Adree Edmo is frankly a rather complicated person. She grew up in Fort Hall. That's the Indian reservation of the Shoshone-Bannock tribes in eastern Idaho. And, you know, growing up she encountered poverty. She was around an environment that included domestic abuse and alcoholism. So she had a tough time growing up.

One of the things that complicates her story is her crime. She is convicted of sexual abuse of a 15-year-old when she was 22. And so some people don't want to learn anymore about her after they hear that. She says she struggled with her gender identity growing up, and then, when she gets to prison, she acknowledges she's transgender and is diagnosed with gender dysphoria.

RN: Can you explain what those terms mean, gender dysphoria?

AP: Absolutely. And that's why we decided to do a podcast focused on this case and Adree Edmo's story. It drops this week. It's called Locked.

You know there are layers and layers to the story of Adree Edmo: why she's in prison. As I mentioned the treatment for gender dysphoria. How Adree's surgery would be paid for should she win. This is a huge political issue also in conservative Idaho.

RN: So, really a lot to unpack. How do you organize that? Can you walk us through the arc of the podcast and what the listeners can expect?

AP: So, we take listeners to Fort Hall, which is as I mentioned where Adree Edmo grew up, to talk to some people who knew her before she went to prison. We also go to northern Idaho to visit with one of the only surgeons in our region that performs sex reassignment surgeries. And then we go to San Francisco to hear the oral arguments before the 9th Circuit Court of Appeals.

And right now there are four episodes. And there'll be another once there's a ruling in her case. But people can listen to them all right now. It's bingeable as they say.

RN: Bingeable, indeed. So, you were there for that hearing, by the way. Tell us more.

AP: Well, it was really interesting to see the two sides argue their case in the short amount of time that they had before the 9th Circuit. So, the heart of this case for Edmo's attorneys is something they called "deliberate indifference." They say that not providing the surgery is deliberate indifference to Adree Edmo's medical needs.

Her attorney Laurie Rifkin says that this is as clear cut as treating a cancer patient. But the other side argues that this is about medical judgment and whether Edmo needs the surgery. That's the heart of the state's arguments that this is not medically necessary care for Adro Edmo — that she does not need the surgery.

RN: What are the stakes here both for Edmo herself and also other transgender inmates like her?

AP: I mean the stakes are high for Edmo. If she wins, then she's provided with this surgery, which her lawyers say is going to be a life-saving procedure for her. And at that point she would be transferred to an all all-women's prison here in Idaho.

But it could also change how prisons treat some trans-inmates like Adree who suffer from severe gender dysphoria. Doesn't mean that they're going to have to provide the surgery left-and-right to any transgender inmate. But it does mean that they'll have to seriously consider that need for certain inmates with a serious medical need.

RN: Well, you've got me interested and hopefully some of our listeners. So where can we find the podcast, "Locked."

AP: So the podcast is available right now on Apple podcasts, on Stitcher, wherever you get your podcast. Just search for Boise State Public Radio and "Locked." It'll come right up and you can listen to all four episodes right now and get updates on when the fifth will drop. 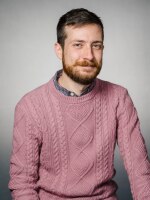 Roddy Nikpour
Roddy Nikpour first discovered the magic of radio in 2011 at Arizona State University's student-run station, KASC the Blaze 1330 AM, where he hosted an ambient music program. From here, he went to Radio Phoenix, producing nationally-syndicated programs and helping volunteers hone their own skills. He returned to Arizona State to earn a master's from the Walter Cronkite School of Journalism and Mass Communication. He comes to us most recently from Maine Public Radio, where he announced, produced, and lended a hand in everyday operations and TV projects. When he's not at the station, Roddy is often reading Latin texts, riding his bicycle, or composing music.
See stories by Roddy Nikpour