Our broadcast signal serving the Moab (90.9) area is currently down. More Information.
Programming

KUER 90.1 has announced that newscaster and radio host Pamela McCall has been named the station’s next local host of Morning Edition. The veteran of public and commercial news organizations will be the voice of NPR Utah’s most-listened-to program, which in recent months has climbed to No. 3 in Salt Lake City’s morning drive.

“I’ve known Utah was a special place since I covered ski racing during the 2002 Winter Games,” said McCall. “I am deeply excited and honored to join the KUER News team and help Utahns start their day.”

“Throughout her career, Pamela has served listeners in some of the biggest international cities, as well as in small, rural communities,” said KUER News Director Elaine Clark. “She’s going to be a great fit for Utah as a nuanced broadcaster, an experienced journalist, and yes, as a ski nut.”

McCall, who holds dual citizenship in the U.S. and Canada, has worked in London, Hong Kong, Vancouver, Seattle and New York City. Her on-scene reports from the World Trade Center on 9/11 earned her a Gracie Allen Award, and she was part of the Edward R. Murrow Award that CBS News Radio received for its coverage. During the second Gulf War, she reported from an amphibious assault ship off the coast of Iraq.

In her new role at KUER, McCall will contribute interviews and other content to the station’s local broadcast of Morning Edition, airing Monday through Thursday from 5 to 10 a.m. and Fridays from 5 to 9 a.m.

“KUER’s weekly audience has increased 41% in the past year,” said Joel Meyer, KUER’s station manager. “With more Utahns seeking out high-quality reporting from KUER News and NPR, we are truly excited to bring Pamela’s skills and experience to listeners across the state.”

Listeners will begin to hear McCall on Morning Edition later this month. Longtime host Bob Nelson, who has served as interim morning host for three months, will return to the station’s midday shift.

McCall’s love of skiing, mountains and radio has brought her back to Salt Lake City. Her recent journey to the Wasatch Front involved her well-worn car, one Canadian province, three U.S. states and a seasoned co-pilot: her beloved cat Possum.

A charter member of NPR, KUER 90.1 broadcasts from the Eccles Broadcast Center at the University of Utah, providing a commercial-free mix of local and national news and storytelling to more than 175,000 weekly listeners across the state. KUER and its HD channels can be heard at 90.1 FM or streamed online at kuer.org and with KUER's mobile app. 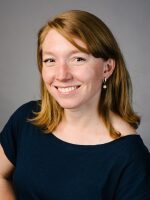 Renee Bright
Renee grew up in Texas and Kansas before attended Vassar College in New York. After graduation, she moved to Utah in pursuit of mountains and outdoor recreation. She began her career in public media at KUER in 2013, and in 2021, she became the Senior Graphic Designer for both KUER and PBS Utah.
See stories by Renee Bright
Latest News
Support KUER
KUER is listener-supported public radio. Support this work by making a donation today.
Donate