New Times For 'On Being' And 'Weekend Edition' Beginning Nov. 2

Studio 360 is closing its circle.

The long-running arts and culture program hosted by Kurt Andersen is ending production. The announcement was made earlier this month by PRX, Studio 360’s production and distribution partner.

Here at KUER, we were sad to hear the news. Studio 360 has been a staple of Sunday programming on our station since 2002. It also leaves an impressive radio legacy: immeasurable insight from in-depth explorations of creativity, an omnivorous approach to culture, and last but not least: the fascinating “American Icons” series.

Full disclosure: I’m not impartial here. For many years, I worked two cubicle rows down from Studio 360 at WNYC, where Kurt and I also worked briefly on a project. Still, I think it’s fair to say to his team, on behalf of the KUER community: Thank you for so many great years.

I’m excited about these changes. I hope you are, too. If you have questions or comments, please send me an email at feedback@kuer.org or call 801-581-6777.

Director of Programming and Promotion, KUER 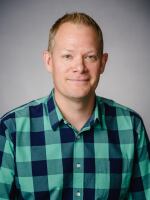