Through Thick And Thin, Best Friends Make Room For Laughter And Tears

Since grade school, best friends Jamie Olivieri and Yennie Neal-Achigbu have been inseparable.

As 2020 comes to a close, Olivieri and Neal-Achigbu, both 37, reflected during a recent StoryCorps conversation on how their friendship has helped them, especially this year as they navigate pandemic life.

The two met in elementary school in Yonkers, N.Y., but became close friends in eighth grade. Since then, they've always had each other's backs — literally.

"I remember ninth grade, I was on the soccer team, and halfway through the season, getting kicked in the knee and not being able to walk," Neal-Achigbu recalled.

So Olivieri carried her friend across campus on her back.

"And I was wondering, 'How the heck is she carrying me?' " Neal-Achigbu said.

Olivieri told her, "You were my person."

When Neal-Achigbu was pregnant with her firstborn, Olivieri was just a text message away for a 2 a.m. snack run, she said.

"You would text, 'I have a craving for crepes,' and then I'd be at the door in my pajamas," remembered Olivieri. "Fully adult but still sneaking out."

"There were a lot of moments like that," said Neal-Achigbu.

They've lifted each other up at incredibly difficult moments.

In 2014, Neal-Achigbu's husband, Alexander, was on his way to a relative's wedding in Ghana when he died in a car accident.

Neal-Achigbu had stayed behind because their youngest child, Xoan, was just 4 months old at the time.

"I couldn't be at home just looking at him, knowing he would be growing up without knowing his father," she told Olivieri.

But having her friend by her side helped Neal-Achigbu deal with the painful loss.

She remembered weekday mornings, when she would drop off her older kids at school and head back to Olivieri's house with Xoan in tow.

"The two of us would crawl into the bed with you and just — you were just there," she said.

Olivieri told Neal-Achigbu, "It's one of those moments that like — you know that life will never be the same. There's a huge well of grief there, but you gotta show up."

The friends, as well as Neal-Achigbu's three children — Zuri, 10, Lyon, 8, and Xoan, 6 — have spent every holiday season together since the year of Alexander's death.

"I wanted to give the kids something outside of the hurt, and it became a tradition," Olivieri said, recalling their first Christmas together.

They're spending Christmas together again this year. The friends, who live about five minutes away from each other in Yonkers, have been in the same isolation bubble.

"You know, as difficult as this year has been, I think when you have little people that are still laughing and still having fun, it's a reminder that, like, it's still worth celebrating. And the kids taught me that you have to hold space for both things," Olivieri said.

Neal-Achigbu told her that she and her children are grateful to have Olivieri in their lives.

"I'm grateful to have you," said Olivieri.

StoryCorps is a national nonprofit that gives people the chance to interview friends and loved ones about their lives. These conversations are archived at the American Folklife Center at the Library of Congress, allowing participants to leave a legacy for future generations. Learn more, including how to interview someone in your life, atStoryCorps.org. 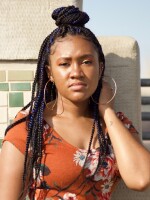 Kamilah Kashanie
Kamilah Kashanie (she/her) is the host of the StoryCorps Podcast. Kashanie's love for radio is rooted in her desire to understand more about what makes us who we are. As a storyteller, she's committed to starting conversations to make lasting changes in underserved communities, and to craft narratives that help give voice to individuals who would not otherwise have a platform to tell their stories. She's also a graduate of the Transom Audio Storytelling Workshop and the host of Feeling My Flo, a reported podcast about menstruation from PRX and Lantigua-Williams & Co.
Lauren Smith
Latest News
Support KUER
KUER is listener-supported public radio. Support this work by making a donation today.
Donate