Following weeks of high rates of COVID-19 cases in Utah, Gov. Gary Herbert announced Wednesday he will not be making a statewide mandate on mask wearing. He did say he would be signing an executive order requiring face coverings in all state facilities, including institutions of higher education and state run liquor stores.

Herbert went on to emphasize the importance of masks for preventing the spread of coronavirus as well as protecting the most at-risk populations.

Salt Lake County Mayor Jenny Wilson has submitted a formal request to require face coverings in the state’s most populous county, which Herbert said he would consider on Thursday.

“I’m a local control person,” Herbert said, indicating that if the data supports it he would likely approve the request because people in local government “know what’s best for them and their community at large.”

Herbert also defended Utah’s COVID-19 task force, after widespread criticism that they are only meeting on an as-needed basis. He said that some people have “misrepresented” the state’s task force.

“This group was established in the early part of March as the first reaction to this new thing that was coming to Utah.” Herbert said, emphasizing the work of ongoing committees that came from the task force as well as its Utah Leads Together plan.

State Epidemiologist Angela Dunn joined via Zoom to address a memo released earlier this week in which she called for the governor to mandate masks and said that if the state’s seven-day average was not reduced to 200 cases per day or fewer, the state would need to increase restrictions.

“The purpose of that document was to inform leadership discussion about how we might adjust response in order to reverse this surge of cases,” Dunn said. “My intention was not to say that we should shut down, no one wants that. My intention was to provide guidance on how we can move the dial in the right direction at the right time.”

Given the continued increase in cases across the state, the governor said he would not be considering any requests from local jurisdictions to loosen restrictions for the next two weeks. Currently there are nine counties in the green, “new normal” phase of pandemic response, while the rest of the state remains in the yellow, low risk phase. Salt Lake County is in the orange, moderate risk category.

“Yellow allows for a wide open economy,” Herbert said. “There isn’t much we can’t do.”

Herbert said that Dunn’s warning that the state would have no choice but to completely shut down was a “misstatement,” that Utah’s economy was never fully closed and that returning to a higher risk phase would not involve a full closure.

Returning to moderate risk has always been an option, Herbert said. He added that he hopes there would be no need to increase restrictions if Utahns can follow prevention recommendations.

Herbert also announced that a member of the governor’s senior staff has tested positive for COVID-19. All staff members exposed to the individual are being tested, a group that does not include the governor or Lt. Gov. Spencer Cox. 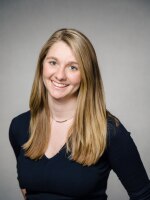 Chelsea Naughton
Chelsea Naughton is a Cleveland, Ohio native who left the Great Lakes for the Great Salt Lake in 2013. They are a regional Edward R. Murrow award winner and studied Journalism at Miami University where their enthusiasm for news gave way to an obsession with public radio. At KUER they help keep the station up to speed on all things "internet." When not in the office, Chelsea can usually be found 1) climbing up a mountain 2) skiing down a mountain or 3) hanging out with their dogs and cat.
See stories by Chelsea Naughton
Latest News
Support KUER
KUER is listener-supported public radio. Support this work by making a donation today.
Donate