'Like Jail With More Privileges:' Honduran Mother Reflects On Her 2-Year Sanctuary Anniversary

Two years ago, Vicky Chavez was facing deportation and almost got on a plane headed to her native Honduras, the country she had escaped to get away from a violent relationship. She came to Utah in 2014 as an undocumented immigrant to join the rest of her family who was already living here.

Her suitcase was packed but she had hoped that Immigration and Customs Enforcement would call her while she was waiting at the airport to grant her a last-minute stay of removal that would have temporarily prevented her deportation. But instead, it was her lawyer who called to tell her that her request was denied.

Fearing for her safety and that of her two young daughters, she decided to take sanctuary inside the First Unitarian Church.

“And I’m here, and I’m happy because Honduras is a dangerous place so I feel better than [in] my country,” she said in an interview for a forthcoming film from KUER’s RadioWest.

The church’s community has fully embraced Chavez and her daughters. The young mother said she considers the members part of her extended family. They eat together, laugh together and worship together. But despite all the love, Chavez can’t help but be sad over the situation.

“It’s really hard,” she said. “Two years here — it’s like a jail with more privileges, right? But it’s not easy.”

Chavez asked for asylum when she entered the country six years ago. But that request was denied. An appeal to that decision was denied as well and a judge ordered her removal. After Chavez entered sanctuary, she decided to ask the 10th U.S. Circuit Court of Appeals to reopen her asylum case.

While Chavez is waiting for that answer, she tries her best to put on a brave face for her two daughters, an 8-year-old and a 2-year-old. She said she prays every night, asking for strength as she continues to fight to stay in the country.

“If God put me in the situation it’s because he has a big plan for me and my family,” she said.

Chavez imagines the day when her family can leave the sanctuary. She said the church bells will ring and she’ll finally be able to live a normal life with them.

News Politics & IssuesimmigrationVicky ChavezHondurasFirst Unitarian Church of Salt Lake CitySanctuary
Rocio Hernandez
Rocio is coming to KUER after spending most of her life under the blistering Las Vegas sun and later Phoenix. She earned bachelor’s degrees in journalism and Spanish at the University of Nevada, Reno. She did brief stints at The Associated Press, the Las Vegas Review-Journal and Reno Public Radio. She enjoys wandering through life with her husband and their toy poodle.
See stories by Rocio Hernandez 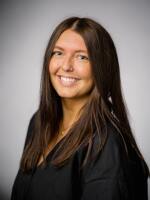 Kelsie Moore
A dual citizen of both Australia and the United States, Kelsie has enjoyed breaking down all of her pre-conceptions of this country as she’s put a lens on the American people. Prior to RadioWest, she was filming short documentaries worldwide, getting to the heart of rural communities disadvantaged by poverty. As she invests in Utah and the community here, she is picking up a slight American accent that her Australian family is not proud of.
See stories by Kelsie Moore
Latest News
Related Content
Support KUER
KUER is listener-supported public radio. Support this work by making a donation today.
Donate