Notes from KUER's listening tour: 'What does Ogden mean today?'

We look forward to hearing more from you on Tuesday, Feb. 15 at 6:30 p.m. Register for the free online event here.

On the second night of KUER’s Ogden listening tour, panelists shared specific holes they see in local media coverage, but as the conversation ranged from topic to topic, it was facilitator Joaquin Alvarado who distilled the conversation down into two words: Strategic imagination.

So, what did he mean?

“If you think about the number of stories that are out there, divided by the amount of reporters and the amount of time, that capacity can dial back expectations,” he said. That number doesn’t mean we cut quality, he reminded; it means we should think about what we can realistically accomplish.

Citing the success of the Seattle Times’ Project Homeless, Alvarado told the group: “Don’t forget the power of listeners to lean into an issue.”

What, then, are some of the issues listeners and KUER could lean into in the Ogden area? The panelists offered a few.

KUER news director Elaine Clark kicked off that discussion by asking the group if they would be interested in more coverage about Hill Air Force Base, telling them, “I’ve dreamed a lot about a military reporter.”

Panelist Thaine Fischer said that “having someone focused on the base and off-base would be very interesting,” for both the local community and beyond, stating that, the “DOD is trying to become almost an angel investor with small tech” in the area.

Panelist CJ Hernandez also reminded the group that the base is doing good collaborative work with the community and that the Ogden area continues to see economic benefits from their presence, with conference dollars and federal wages making their way into the local economy.

However, not all the news from Hill is positive, something that panelist Wendy Ogata reminded everyone about.

“I shudder,” she said, “to think of all the stories we’re not covering with Hill Air Force Base, the good and the bad — especially the bad.”

From Hill coverage, the conversation turned to why some Hill executives (and their high salaries) may look to live outside of the area, with panelist Angel Castillo pointing directly to the bad reputation of Ogden Schools District — a reputation, she believes, is unfair.

“There is nothing wrong with Ogden’s schools,” she said. “They produce Presidential scholars and people who qualify to be Presidential scholars on a regular basis. So, there are other things that are happening within the community that have to do with equity and access. OSD’s population is 53% BIPOC and, I think, 51% is LatinX/Hispanic. There is a disconnect between making sure parts of the community are uplifted and have access…The digital divide is real.”

Castillo’s comment swung the conversation toward education, with panelist Adrienne Andrews reminding the group that, “We should be talking about Weber State pursuing an emerging Hispanic-serving institution (HSI) designation, which means actively working with the K-12 system in our school districts and making sure that those students have clear pathways and resource opportunities to get to the university.”

An, at times, unsavory reputation is something Ogden has lived under for much of its history, dating back to the infamous quote from notorious gangster Al Capone reputedly having once said that he wouldn’t have dared to walk the streets of Ogden for fear of his life.

Tim Vandernack said that, “Some people look down on Ogden as kind of dangerous, someplace to flee.”

Angel Castillo replied in the chat to Vandernack, “Most definitely. Folks continue to perpetuate the ‘unsafe/crime-ridden’ narrative that, while it may have been true 15 years ago, it's not the story NOW.”

Apart from outside perception, current local residents contend with their own preconceptions – especially that with new growth, the city is changing in negative ways. Vandernack said, “I also think there’s this sense in western Weber County that (the area) is losing its country feel. It’s inevitable that those people are rubbing their hands and worried that we’re straying from what we (used to be).”

This point led Andrews to ask, “What does Ogden mean today? … Who gets to count who is in our community and who isn’t? We share a common humanity. But the things that make us different aren’t bad; they just make us different.

And obviously, not everyone is wringing their hands about a new Ogden.

Di Allison wrote in the chat that “Karen’s kids asked ‘when did Ogden get so cool,’ when they came back from living out of state.”

Amir Jackson made the point that, “If you focus on youth, they are not scared of losing the culture.”

All of these issues came back to what Joaquin Alvarado emphasized about digging into the idea of “strategic imagination.” While there are many issues crucial to understanding the area, KUER may only have resources to tackle a few – but if KUER is thoughtful and informed about their approach, it’s a good starting place.

The evening concluded with Alvarado asking the group — and especially KUER — to “imagine what the community would say if you showed up in a real authentic way, in a really focused way. Journalism is never the solution, but it is part of the solution.” 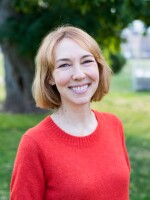