Utah’s Own Polytype Trucks to Texas For SXSW Music Festival

Last month, I had the incredible opportunity to attend the 27th annual South by Southwest (SXSW) Music Festival in Austin, Texas. Started in 1987 with around 700 attendees, the music conference has now grown to become the world’s largest festival of its kind. More than 2,200 official performers play in 100+ venues within five days, attracting 82,000+ attendees. SXSW unites bands, brands, artists, journalists, industry types, street performers, opportunists and music enthusiasts from all over the world. Hundreds of unofficial SXSW showcases are also booked in the form of day parties, corporate sponsored house parties and barbecues. Virtually every vacant lot, Unitarian or Episcopal church, coffee shop, dive bar and hotel conference room become temporary spaces for live music. Mini-concerts are literally everywhere—inside the airport food court, the downtown art gallery, the park by the river and even on the river, in riverboats. This format is all part of the allure of SXSW, stumbling on new and unexpected talent in the most unusual places.

One of the hundreds of musical acts making the trek to Austin, Texas to play SXSW was Provo’s own Polytype. They’re an Indie-Electronica group primarily comprised of Jared Price, Jason Gibby and Mason Porter. The group’s debut album, Basic//Complex, was self-released in 2013. It quickly gained the band attention with the local media including KUER’s own RadioWest. That same year, the trio applied to perform at SXSW, but didn’t make the grade. After submitting their application a second time, Polytype was accepted to play SXSW 2014. The band secured an official showcase on the first night, Tuesday, March 11, 2014 at The Iron Bear. The band’s manager also scored the group performing slots at two high-profile day parties later that week. The parties were for two music blogs: The Wild Honey Pie and Beautiful Buzz. I missed Polytype’s performance at these day events, but I did see their SXSW showcase debut.

The Iron Bear Bar is a two-leveled gay bar located a few blocks away from the crowds on 6th Street. It’s one of my favorite SXSW venues in Austin because the staff is polite, the bathrooms are clean and the drinks are strong. I showed up to the club a little early around 8:35 p.m., just as an Austrian duo were playing their last two songs. 10 minutes later, they were leaving the stage and members of Polytype began hustling to get their equipment staged, sound checked and ready to go. Each act playing SXSW is allotted a very small window to do this and, if they go over, it cuts into their 30-minute set time. Every SXSW stage is equipped with amplification equipment (also know as a “backline”), allowing for acts to just “plug-in” their instruments and play. Polytype’s instrument setup is a little complicated since they use electronic elements. But their equipment was promptly organized, and the band immediately launched into their brand of dreamy, pop-electronica. Several other festivalgoers from Utah were in the house including representatives from Salt Lake City media outlets, SLUG Magazine and City Weekly. The crowd was sparse with only a few dozen attendees, a common issue for a Tuesday night showcase in any town, but those there were feeling the music, swaying with eyes glued to the stage. The bartenders were even grooving as they slung drinks for customers, and I even saw the sound engineer bopping his head in physical agreement that Polytype play a great live show. Polytype’s set list included many of my favorite songs from Basic//Complex, like their single, “Cyclone.”

The half-hour show went by too quickly, as most excellent performances do. Afterward, I struck up a conversation with one of the band member’s sisters who lives in Texas.  She has not yet heard her brother’s project and it was fun to see her beam proudly with sisterly affection. She was floored by Polytype’s live show and excited that they could essentially come to her—to her state to perform. The band had driven all night from Provo to Austin to do so, arriving just several hours before taking stage. They did an incredible job of masking their fatigue; smiling and chatting to the audience as they quickly packed up their gear, leaving the stage for the next band to play.

Angela H. Brown is the editor of SLUG Magazine and serves on KUER's Advisory Board. 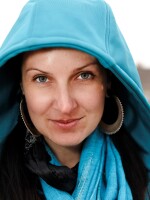