KUER 90.1 announced today that Cristy Meiners, executive producer of RadioWest, will lead KUER as interim station manager beginning May 10. In the role, Meiners will oversee operations, programming, news and more for the NPR member station heard by 175,000 Utahns each week.

“KUER has long been a station that punches above its weight, creating the kind of quality programming one might see from a larger station, thanks in large part to the dedicated work of its talented and passionate staff, and to the support of our amazing listeners and donors,” said Meiners. “I am thrilled by the opportunity to work with my station colleagues and with the wider community to maintain the high standards our listeners have come to expect from KUER.”

Meiners began her journalism and public radio career as an intern in Washington DC on NPR’s Arts Desk. She produced The Bob Edwards Show and Bob Edwards Weekend for SiriusXM Satellite Radio for eight years. She returned to Salt Lake City as the arts and entertainment editor at The Deseret News before joining the RadioWest team in 2019.

Meiners replaces Joel Meyer, who came to KUER as program director in 2018. He is leaving the station to take a role as chief content officer at Freakonomics Radio Network. KUER’s director of audience development, Tricia Bobeda, is also joining the Freakonomics team.

“Once again, remarkable talent at KUER is recognized around the country,” said KUER Executive Director Maria O’Mara. “What’s amazing is the depth of leadership at our station. Cristy is beloved by the RadioWest team and the whole station. I have no doubt this will be a summer of tremendous accomplishments.”

Meiners has a B.A. in English from the University of Utah and an M.A. in Humanities from Brigham Young University. She helped shape a reboot of RadioWest in 2019, after a short hiatus. The program, hosted by Doug Fabrizio, debuted on KUER 20 years ago.

In addition to a national search for a permanent station manager, KUER has also begun a search for a part-time, temporary managing producer for a new podcast. Current KUER job openings can be found at www.kuer.org/work-with-kuer. 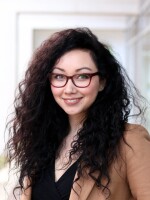